The mystery over the disappearance of Malaysia Airlines flight 370 has deepened after satellite data emerged to suggest the plane flew on for hours after it was reported missing.

The search operation is now concentrating on huge areas to the north and south of Malaysia, after locational ‘pings’ detected by a satellite appeared to indicate the plane was somewhere on an arc stretching either north up to to Central Asia, or south, to the Indian Ocean and Australia.

Evidence revealed on Saturday 15 March by the Malaysian Prime Minister Najib Razak suggested the jet was deliberately diverted by someone on board about an hour after takeoff.

Malaysia Airlines says the plane lost contact less than an hour after takeoff.

No distress signal or message was sent.

The ACARS – a service that allows computers aboard the plane to “talk” to computers on the ground – was silenced some time after 01:07 as the plane crossed Malaysia’s east coast.

The plane’s transponder, which communicates with ground radar, was shut down soon after this final communication, as the aircraft crossed from Malaysian air traffic control into Vietnamese airspace over the South China Sea.

At 01:37 the next ACARS transmission was due, but never sent.

The plane’s planned route would have taken it north-eastwards, over Cambodia and Vietnam, and the initial search focused on the South China Sea, south of Vietnam’s Ca Mau peninsula.

But evidence from a military radar, revealed later, suggested the plane had suddenly changed from its northerly course to head west. So the search, involving dozens of ships and planes, then switched to the sea west of Malaysia.

MH370’s last communication with a satellite, disclosed a week after the plane’s disappearance, suggested the jet was in one of two flight corridors, one stretching north between Thailand and Kazakhstan, the other south between Indonesia and the southern Indian Ocean. 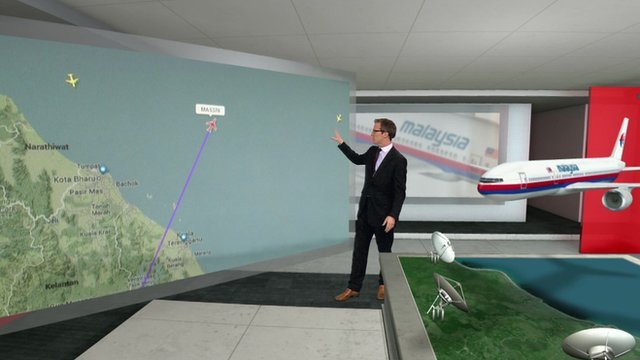